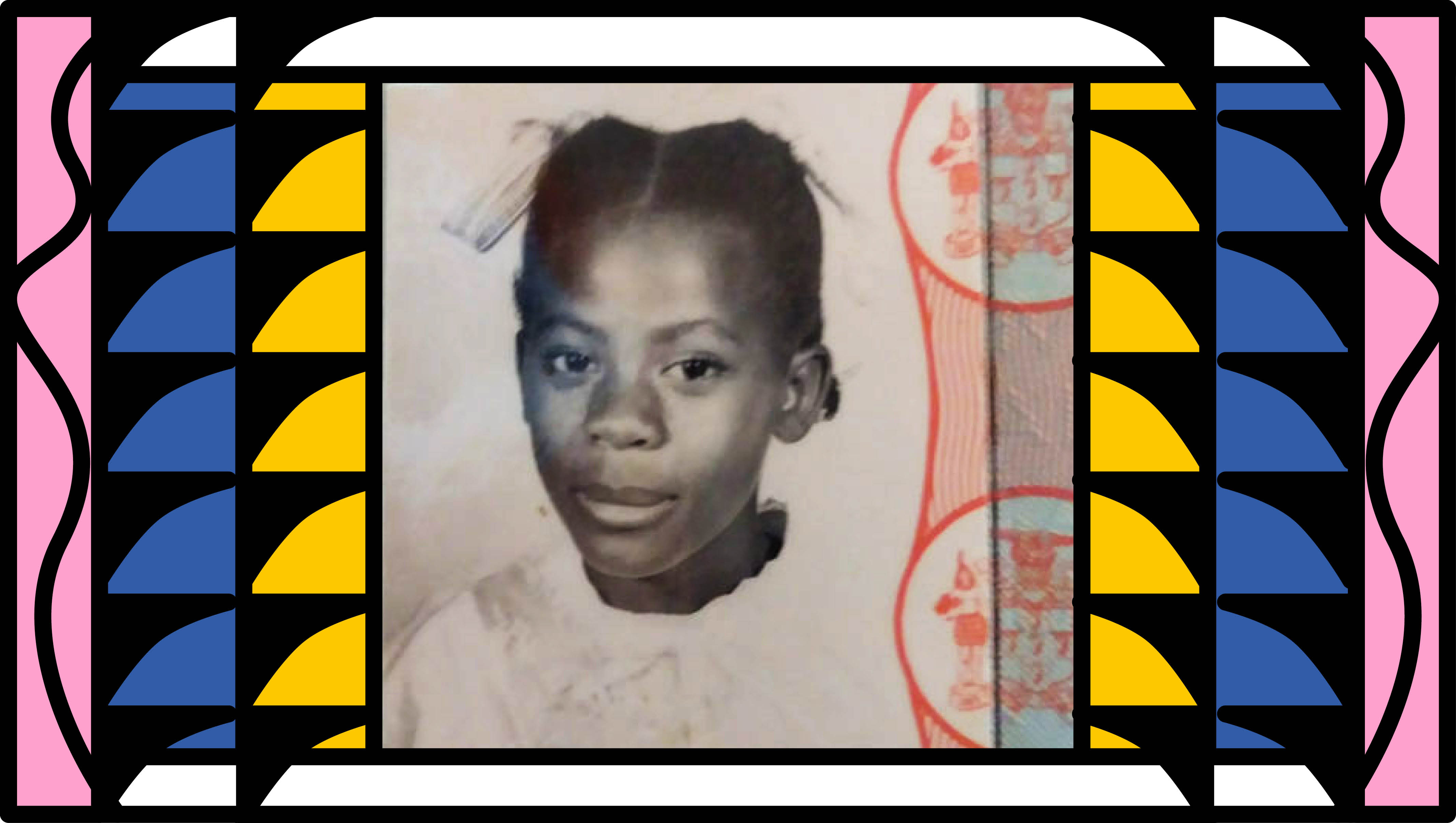 In December 1990, at the tender age of 12, I boarded a plane at Kingston International Airport in Jamaica of the West Indies to JFK Airport in New York. When my plane took off from Jamaica, it was a beautiful sunny day, but when it arrived in New York, it was on a cold, windy, rainy, snowy night.

My first surprise was to see ice falling from the sky. I might have heard of snow, saw it in story books, but I don’t remember ever witnessing it pile up on the pavement, not even on television because we didn’t have a TV in my home in Jamaica.

That night it took my father and me hours to reach my new home on Boston Ave in the Bronx, where he lived with his cousin. I remember my daddy calling me by my family name for me to wake up, to tell me that we had arrived.

Slumped and learning, I followed behind my dad into a startling new environment. I remember standing on the edge of the steps and my father saying for me to, “come, it’s not a cellar” because cellars back home is when you go under the house. My father was already living in NYC for years and once he got himself together, he sent for my brothers and I. My papers came through about two years before theirs and he had come to Jamaica to get me. I hated it, it had no window, I couldn’t see outside and it was either too hot or too cold and it was dark and moist. To this day at almost 40 years old, I hate basements and have refused to ever live in one again.

The next day, my father and my cousin were outside cleaning the driveway from the snowstorm and I remember coming out in a shorts jumper. It was green on the bottom and green and white stripe on top and some flip flops. The neighbors and everyone that drove by was concerned as I stood outside in shorts and asked if I was not cold. My dad would answer for me saying that I just came from Jamaica and the cold has not hit me yet and that the Jamaican sun was still in my blood.

Standing outside in my green jumper in the dead of winter, on the ice, the cold air on my skin, made me feel invincible. While everyone was in shocked that I was not cold, I was enjoying the cool breeze across my freckled cheeks, up and down my toned track legs.

To this day, I still love the cold and winter is my favorite season, I love sweaters and a chill house, with lots of windows. I can still go outside in winter in just a shirt and not be cold. I hate wearing hats, scarves, and gloves. And winter boots? Oh no, my feet get way too hot for me to keep on all day.

I hated living in apartment buildings because they had project heat. You know the heat that is so hot that you have to keep all of your windows open all winter long? And who needs to wear a p.j to bed in winter? Not me, just a t-shirt is more than enough.

The biggest adjustment was when I started school, P.S. something? I had never seen so many white people in all of my life.  They looked, spoke and dressed differently. Coming from Jamaica, we spoke patois. They spoke proper English with what we call a twang back home. It took me time to understand what they were saying and they definitely didn’t understand my hard Jamaican accent.

Their clothes were so fashionable and fit perfectly. I was still wearing some of the clothes my mother sent me and my father had gone shopping for me. Nothing matched and at 12 I didn’t know how to match up my clothes because we wore uniforms to school, we had yard clothes, church clothes and going out clothes.  The kids in the Bronx thought that I dressed strange and talked strangely. I looked red, from the Jamaican sun, with red hair and a freckled face.

Many of the students were amazed at my freckles. There were kids who wanted to touch my freckles to see if they can take them off and some asked if they could touch my hair because my hair was natural. They laughed at the way I spoke and some would pick on my “nappy hair.” The teachers, however, adored me because I was somewhat more advanced than the kids that I studied with.

I don’t remember his name, but I had my first crush that year. I often think about him and how sweet he was to me. He was an African American boy, who even though he had a girlfriend and girls adored him, he adored me.

I don’t know what it was, but he would open doors for me, he would walk behind me in between classes, he wouldn’t allow anyone to pick on me and call me names or talk about my clothes. We had homeroom together and shared a few classes. I was the happiest girl when he was at school and the saddest when he was absent. When he wasn’t there, I remember just sitting and staring through the window at the snow, just thinking about him, where he was, what was he doing.

You know, I often wonder why I love and adore African American men. I have tried to date Jamaicans, Africans, Trinidadians, etc, but there always seems to be something missing? I feel safest and happiest in a relationship when I am with an African American man.

For over 20 years, I wonder, what was it about African American men that I just love so much? I would give the excuse of coming here at 12 but I had friends who came here at 5 and only dated Jamaicans.

I would give the excuse that it’s because I grew up with mainly Americans, and not so much Jamaicans and other people from the Islands, but that didn’t make sense either.

The writing of this essay has solved the riddle.. I love African American men because of that teen boy who was my protector, who open doors for me and walked me to my classes just to make sure no one would pick on me. He was the first male to set the standard that I deserve to be treated with respect and affection. He protected the little freckled face girl with nappy hair, who spoke weird and wore not so fashionable clothes, because my father had no fashion sense, and had already bought my clothes for me, probably on Boston Ave.

Since I arrived in NYC in December, I only had to attend that school for a few months then transferred to Truman High School. Before the transfer, my father’s friend gave me a perm and that felt different.  If felt lighter and it was so much easier to handle. Every 2 weeks on Saturday nights my father would take me to her house to get a wash and perm touch up.

Then her daughters were jealous because my hair was longer than theirs. She was perplexed at why I hadn’t had a perm already. “How can you be 12 years old and don’t have a perm?” I remember her asking. But in those days, living in the country in Jamaica, the only women that I remember having a perm, were those ladies that traveled to the U.S and returned. No teenage girls in Jamaica had perms back then.

Not long after, we moved to Florida and the heat was unbearable. We didn’t have any air condition, but I remember visiting a friend’s home and they turned their air on the wall so when I went back to my house I turned the air on too, but come to find out we did not have air, and I had turned the heat on. My father was angry furious, wondering why was the house so hot. I was so naïve that I had the windows closed, waiting for the air to kick in.

In Florida, my 2 brothers joined my father and I and we attended a high school that we could count the number of students of color on one hand.

Life in the United States was just different. The food, weather, clothes, seasons, schools people, everything was different, and it was a culture shock for me. In Jamaica, our motto is “Out of Many, One People.” So we’re one people. There was no difference, there was no choosing what color you are or anything like that.

I remember being in college here and was told to check off African Americans on those forms, but as I got older and thought about it, “I am not African American so why check that off?”

Thanks to my mom who still lives in Jamaica with her husband and my other 3 brothers,  she started my early reading. I would read the books I brought from Jamaica with me, don’t remember the names but my father had a set of Encyclopedia and he would have me read to him. He was somewhat illiterate so I would read his mail, write his checks for him and so on. I loved reading the stories of the Bible even though I didn’t understand much of what I was reading.

A funny story about me reading to my dad-I use to love Hercules, Zina and Night Rider. My dad didn’t want me to watch too much T.V. But, on Saturdays, he would lay on the couch and I would sit on a couch that I could see the TV. I would pretend to read while I sneaked and watched t.v from the side of the book. My father never knew I wasn’t reading the book.

As I write this story, I am grateful for this opportunity to flip back through the pages of my childhood. Some fun memories, new revelations, and insights. Over the last almost 30 years since I left that beautiful little Island in the Caribbean sea, I have been through so much like having a baby at 16 years old, while being a runaway and homeless teen. But through it all, God has kept me and has always but the right people in my path to help and guide me to where I am today.

Today, I am a graduate of Rutgers State University,  I work in Social Services while pursuing being a full-time author and blogger. I am still living in NJ, with my husband and 2 beautiful children who are 20 years apart. We live in a beautiful home with lots of windows and I still hate basements, but still love winter, the cold and a chill home and lots of sweaters.

Mom and writer Janice Hylton-Thompson is the author of several books to encourage the body of Christ and is currently at work on her first novel. Her blog focuses on words of encouragement on various topics such as inspiring women to walk in their royalty.

I enjoyed reading your story.

What a sweet story.